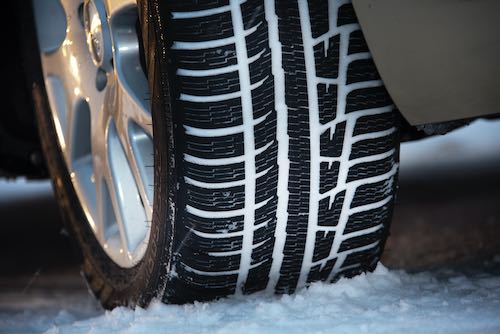 Excellent grip on snow and ice is basically what you want from your winter tires. This is basically what makes a winter tire good for winter use versus a bad tire, which might not be able to show the same properties. It is often the studded tires that will have the best properties in these conditions, as the studs will help to provide the excellent grip on ice, while on snow both the non-studded and the studded tires tend to have quite similar properties. However, the new non-studded tires can live up to this promise due to innovations in both the tread and the design of the tread pattern. Since they will not have studs, they will need to rely on the tread to produce these properties.

Both non-studded and studded tires are dedicated tires, which do require that you have another set of tires for warmer seasons. So even if choose non-studded tires they are not for all year-round use. You also have some tires that are approved for winter use, they are the so-called all-weather tires. They are a hybrid and will act as winter tires when the temperatures drop and as all-season tires when you drive in warmer temperatures. They won’t have the same grip and traction on ice as the studded tires do, but you have the flexibility of being able to use one set of tires for the whole year and you will never be caught with the wrong tires on your car. If you are surprised by a snowstorm you are better off using the all-weather tires that having all-season tires. All-weather tires are great for areas that don’t have long and regular winters, while if you have a real reoccurring winter, then the dedicated winter tires are to prefer and if the studded tires are allowed in your state or province, then they do provide the best grip on ice.

This allows for a good all year-round use, and you can completely forget about the weather forecasts. They will however not be as good as the best winter tires, as they have to cover a wider spectrum of properties. They will however be much better than having all-season tires during the winter season, which is very dangerous, and having winter tires during the summer season. The latter is not dangerous as such, but the tires will wear out faster than expected due to the fact that the tires will become too soft.

For more information regarding both non-studded and studded tires that are great on snow and ice, visit: https://www.nokiantires.com/